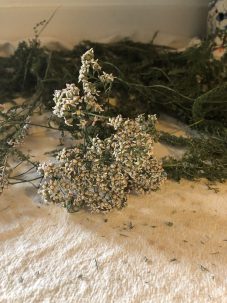 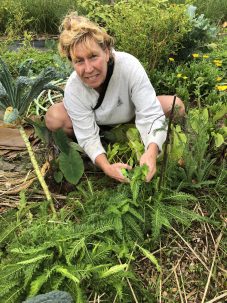 Yarrow is a healer!   It is good for the “wounded warrior” . . . and the “wounded healer”; those who are tough on the outside and wounded on the inside.  Interesting history of Yarrow, Achillea millefolium; It is the tea that the Greek mythical warrior Achilles was dipped in to protect him from poisonous arrows, in the tale his mother held him by the heel and dipped him in a vat of yarrow tea.

Yarrow hydrosol is used in wound healing.  It can stop bleeding.  The hydrosol is safe to use on cuts and wounds (most oils and essential oils should NOT be used on open broken skin) making it a staple to keep on hand — especially in the summer months.  It is also a broad spectrum anti-microbial; it has been tested against staph, E-coli, klebsiella, pseudomonas, and Salmonella.

It is highly anti-inflammatory and can be useful in reducing pain from musculoskeletal aches and pains, stiffness, tendonitis, etc.

Yarrow is cyto-protective meaning it protects your cells from toxins.  It has also shown to be protective from ionizing radiation.

Yarrow is anti-inflammatory and for good reducing skin irritation and inflammation.  It is cell regenerative and due to its salicylic acid it’s good for complexion; it breaks up acne and blackheads and is used by the cosmetic industry for these reasons.  I use it to mist my face with just before applying my facial oils.